The purpose of Alpha Chi Sigma is to uphold the Three Objects of the Fraternity, which represent the goals and ideals of the organization.

Alpha Chi Sigma is a co-ed professional chemistry fraternity. Among its membership can be found numerous Nobel Laureates, arguably the most prestigious international award one can receive. Professional organizations have their place, and Alpha Chi Sigma can provide students in chemistry and related fields with the interests and bonds of fraternity.

Alpha Chi Sigma was founded at the University of Wisconsin at Madison on December 11th in 1902 by a group of undergraduate students. The fraternity grew, holding two initiations within the first six months. The founders continued to seek a national fraternity, becoming officially incorporated on January 22, 1904. The Beta chapter of Alpha Chi Sigma was established at the University of Minnesota in 1904, and AXΣ continued growing as the founders graduated and spread across America.

Alpha Chi Sigma began as a all-male fraternity, but with the increasing number of women enrolling in chemistry-related majors, and many receiving special recognition from the fraternity beginning in 1923, a motion to extend full membership to women began. After much discourse, admission of women was approved at the 30th Biennial Conclave held in 1970. Nineteen women were recorded as full members on September 1, 1971, and Alpha Chi Sigma has remained a co-education ever since.

Now, more than a century after the very first chapter was founded, Alpha Chi Sigma stands as the nations only professional chemistry fraternity, still dedicated to the ideals and visions of the nine founders. 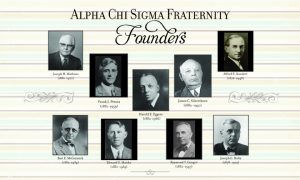 Beta Iota was initially named Sigma Chi Alpha (ΣΧΑ), a local chemistry fraternity at the University of Florida in Gainesville, FL.  ΣΧΑ was founded by graduate students in the Departments of Chemistry and Chemical Engineering with the support and guidance of several keys members of Alpha 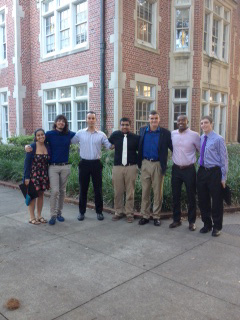 Chi Sigma on Faculty and Staff at UF at the time.  The founding class was installed on December 9, 1952.  The goals of the local fraternity were similar to ΑΧΣ, but with a fourth, additional aim:  to become a chapter of ΑΧΣ.  They achieved this goal the following fall, as ΣΧΑ gave way to ΑΧΣ. The chapter was given the letters “Beta Iota” (or BI), and was officially chartered on October 31, 1953. The 25 charter members are listed in a HEXAGON article from Dec 1953.

The BI chapter had a long stay on campus, but was eventually disbanded. ΒΙ went inactive in 1974, but for noble reasons.  A chapter located in Texas wanted to take a vote at conclave that would officially allow them to deny women membership into their chapter of the fraternity, fearing the loss of their house charter. Livid at the notion, the Master Alchemist at the time threatened to disband should the vote be brought to the floor. It was brought to the floor and did pass briefly. True to their word, the Beta Iota chapter disbanded and would not return to the University of Florida campus for more than 40 years.

In January of 2014, the University of Florida became a colony of Alpha Omega at Georgia Tech. Eleven individuals from various colleges began their pledge education with the assistance of two graduate students who became brothers at other chapters of Alpha Chi Sigma.  The Alpha class officially became brothers and founders of the Beta Iota Colony of Alpha Chi Sigma on April 11th, 2014.